Apartment sales are booming on the Upper West Side. Click to expand.

The talk around the water cooler in many brokerages these days is that the market has gotten surprisingly hot.

Such talk and my impression from searches that I have been conducting for various clients prompted my post a few days ago about the speed with which three- and four-bedroom co-ops and condos on Manhattan’s Upper West Side are finding buyers.

Today, with an MBA at my side, I decided to conduct a more thorough analysis, using statistics from the broker database (OLR).  We analyzed the number of contracts signed and apartments sold on the Upper West Side between 59th and 125th streets from Riverside Drive to Central Park West at intervals over the past year.

Sure enough, there has been an unseasonal surge in contracts signed (green) and transactions closed (orange) recently. END_OF_DOCUMENT_TOKEN_TO_BE_REPLACED

The 30-year fixed-rate mortgage (FRM) averaged 4.98 percent this week, barely down from last week’s 4.99 percent, according to Freddie Mac.  Last year at this time, it was 5.10 percent.

Yet the Mortgage Bankers Association (MBA) said in its latest report that loan application volume fell to 10.9 percent on a seasonally adjusted basis for the week ending Jan. 22.  Unadjusted, the change was 10.1 percent.  Compared with the same week a year ago, there was 19.8 percent less activity.  END_OF_DOCUMENT_TOKEN_TO_BE_REPLACED

Looks nice. But does the sales office want to make a deal?

If you’ve been wondering how those Bronx apartments that were left unsold after November’s auction are doing, you won’t find out here.

I looked up the Solaria in the broker database (OLR) the other day and found it unchanged since, I think, before the auction was held.  The same 10 or 12 units are listed, and many more went begging for buyers following the event. END_OF_DOCUMENT_TOKEN_TO_BE_REPLACED 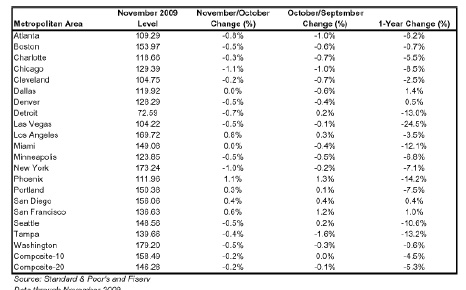 In fact, New Yorkers and residents of other dense urban centers always can pay little heed to the monthly report of housing data from Case-Shiller or any other single sources of information.

Their one virtue is to examine a dated snapshot of the national housing market, excluding areas such as the Big Apple, where few single-home sales occur.  Case-Shiller leaves out apartment sales and its reports embrace whole Metropolitan Statistical Areas (MSAs). In addition, the sample of 10 or 20 cities is suspect in my layman’s eyes.

In the case of Manhattan, the MSA covers all the boroughs plus suburban New Jersey and Westchester County. And as everyone knows, the percentage of single-family home sales in the borough never reaches beyond the lowest digits.

I suppose investors and others who might be looking, unreasonably, at the national market for trends in the biggest cities can benefit from glancing at the numbers. But using those statistics for anything greater than a very rough gauge of what is or, worse, will be occurring in a given market is pure folly.

All that said, you may well be able to enliven your cocktail chatter by knowing END_OF_DOCUMENT_TOKEN_TO_BE_REPLACED

The living room of the apartment that "Jane" and "Jill" lost.

Call them Jane and Jill, clients of mine who searched on their own for many months.  Owners of a weekend place in the Berkshires, they decided it was time to move from their Manhattan rental to an apartment on the Upper East Side.

Finally, the couple found a co-op they loved, even speaking at length with the listing broker to the extent that they tried out a verbal offer on her.  It was only afterward that they decided to bring me into the picture, and their timing was not advantageous.

After calling me, they e-mailed the broker – call her Joy – and let her know that I would be representing them. Of course, that meant that the broker would have to split her commission with me, rather than keeping the whole thing (minus her brokerage firm’s take).

The following Sunday I visited Joy’s open house, told her my name and received neither a welcoming smile or even acknowledgment that she knew why I was there.  In fact, as I left, I asked her if she understood who I was.  “Yes,” she replied icily.  And not another word.

Now that I have that off my chest – though I don’t believe it’s incidental – let me tell you that the one-bedroom apartment with slim views of the East River from the ninth floor is lovely with pleasant kitchen and well-proportioned rooms.

Clients of mine are looking for preferably a four-bedroom apartment on Manhattan’s Upper West Side. I accompanied them this past weekend to look at some 11 candidates.

They would have seen more, but two or three of the ones that interested them became unavailable virtually overnight.

One had a Sunday open house canceled because a contract for it was signed on Friday. The seven-room condo (below) had been on the market for all of three weeks at an asking price of $3.1 million.

On and off the market in a flash.

Another apartment that they were eager to assess was just listed at $2.35 million and had a two-hour open house scheduled on both Saturday and Sunday by appointment only.  A total of 16 prospective buyers were able to sign up for a 15-minute increment almost immediately, and another 35 – 35! – will have to wait until after Feb. 14 to see the place.  (The broker assured me no decisions will be made until everyone has had that opportunity.)

Of the apartments we saw yesterday, maybe half were overpriced, some by as much as 20 percent in my estimation.  You won’t have to hurry to make an offer for them because they surely will linger on the market.

One we visited in a recently completed condominium was offered at around $3.3 million, and the broker let me know that it might go for as little as $2.7 million. A couple of years ago in our overheated market, big apartments found buyers about as quickly gluttons empty platters of shrimp at a cocktail party–there was hardly anything left to show.  Last year, END_OF_DOCUMENT_TOKEN_TO_BE_REPLACED

A community’s social offerings, its physical beauty and its openness to new and different people are most important to making residents love where they live, according to  a Gallup study of 26 U.S. communities completed last fall.  It found that the worst economic crisis in decades is not a key factor in attracting and retaining residents.

After interviewing close to 28,000 respondents over two years, the study learned that social offerings such as entertainment venues and places to meet were the top factor in 21 of 26 communities.  That quality was followed by how welcoming a place is and the area’s aesthetics – its physical beauty and green spaces. END_OF_DOCUMENT_TOKEN_TO_BE_REPLACED

This graph from CalculatedRiskBlog.com says it all.

Do you want the good news or the bad news first?

The good news is that reduced confidence leads to reduced inventory, and Lord Keynes was right about the correlation between supply and demand.

The bad news is that decreased building means fewer jobs and a sluggish economic recovery. END_OF_DOCUMENT_TOKEN_TO_BE_REPLACED

To answer the question posed above, I would say the likelihood is zero. The possibility isn’t even close to zero.  It’s zero.

This terrace, which is next to a schoolyard, shows up far better in a photo than in person.

The listing demonstrates beyond a doubt that any broker can fail to price, market and sell a property through sheer stupidity or greed. The stupidity would be taking the listing from an obstinate owner. The greed would be “buying the listing,” as in promising the owner a higher price than the broker can deliver. END_OF_DOCUMENT_TOKEN_TO_BE_REPLACED

The newspaper said that the last 11 owners to sell their luxury condos at the Plaza Hotel sold them at a loss, including the owner of Apartment 409, which sold for $8.5 million less than it cost 16 months before.  Reported the Times: END_OF_DOCUMENT_TOKEN_TO_BE_REPLACED