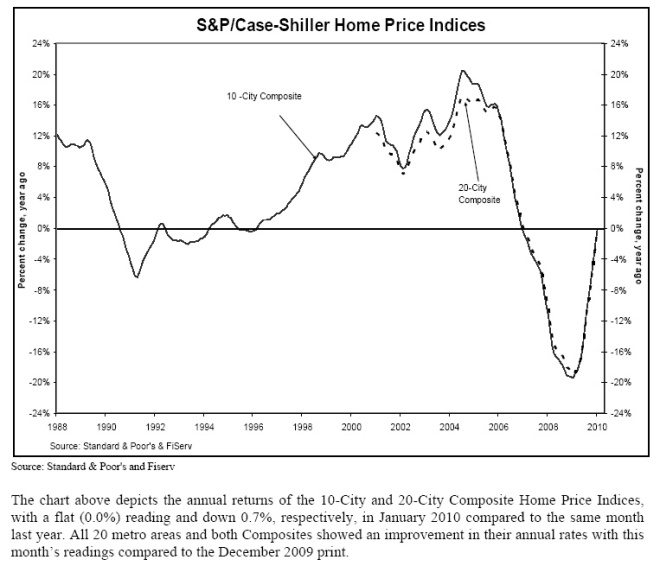 Data through January in the S&P/Case-Shiller Home Price Indices show that the annual rates of decline of the 10-City and 20-City Composites improved in comparison with December.

The gauges, which omit apartment sales and include whole metropolitan regions, actually had the 10-City Composite unchanged from a year ago and the 20-City Composite down only 0.7 percent versus January 2009.

Annual rates for the two Composites have not been so close to a positive print for three years.  Commented Standard & Poor’s David M. Blitzer:

“The report is mixed. While we continue to see improvements in the year-over-year data for all 20 cities, the rebound in housing prices seen last fall is fading. Fewer cities experienced month-to-month gains in January than in December 2009, on both a seasonally adjusted and unadjusted basis.” 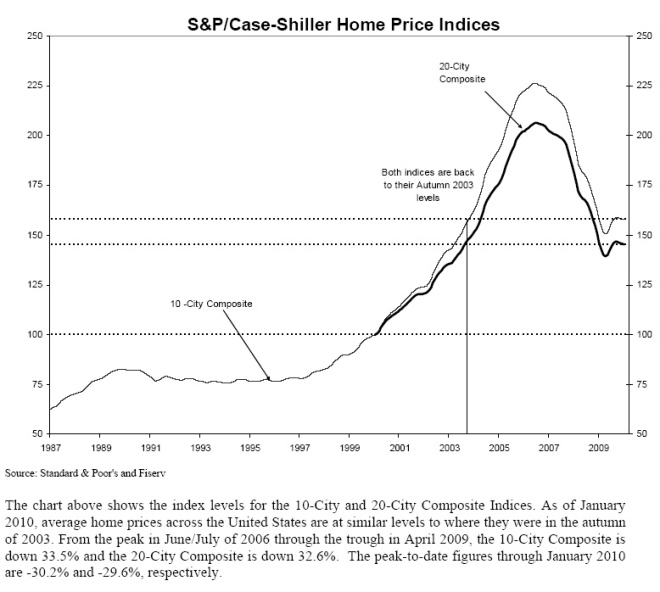 Los Angeles and San Diego showed slight improvements in actual index levels from the previous month, but all other metros and the two composites showed a slight drop from their December 2009 levels.  Of that, four markets – Charlotte, Las Vegas, Seattle and Tampa – posted new index lows as measured by the current housing cycle, where, depending on the market, Case-Shiller found peaks in 2006 and 2007.

Tampa and Las Vegas experienced some of the largest gains and declines in this cycle, while Charlotte and Seattle saw much more modest price booms and relatively late peaks. 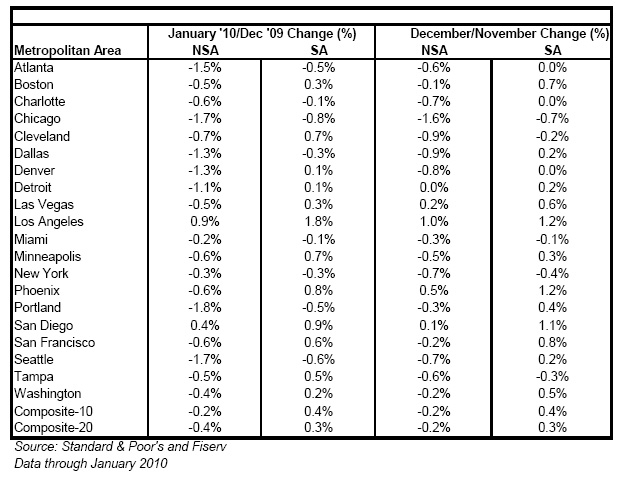 Yet San Francisco and Minneapolis were 15.2 percent and 12.9 percent above their trough values.

On a relative basis, Washington, D.C., Los Angeles and New York have held up the most, with each of those markets still 70% above their January 2000 levels.

Las Vegas, which once stood 135% above its January 2000 level, is now showing price increases about 4% above that same level. Detroit remains that one market in which average value is below 2000, approximately 28% below that value.

Noting that all 20 metro areas and both Composites showed an improvement in their annual rates  compared with December, Blitzer nonetheless observed that other recent data on housing also paint a “mixed picture.”

“We are in a seasonally weak part of the year, but given the S&P/Case-Shiller Home Price data, we can’t say we’re out of the woods yet.”

“It is only a matter of time before the index records a double-dip in prices,” Paul Dales of Capital Economics said.

More than 22 years of the Case-Shiller indices are available, and you’ll find a digest of the latest news on the U.S. and New York City housing markets in the free newsletter that I write on alternate Fridays.