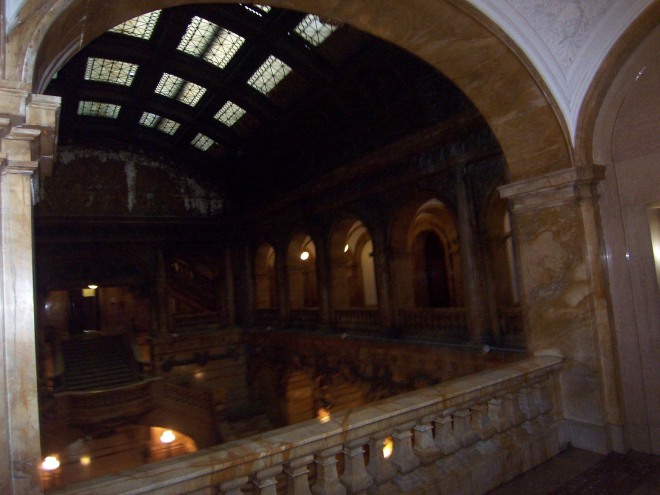 This is the best I ever can manage for a forbidden photo inside the impossibly lush Surrogate Courthouse.

Only a couple of dozen hopefuls turned out for the city’s estate auction in the Surrogate Courthouse yesterday, so two lone bidders ran away with co-ops at the minimum asking price.

Lawyer Glenn Ostrager was the sole bidder for the 825-sf apartment at 60 Sutton Place South, which he won for $580,000.  Paddle in hand, a second bidder dropped out before the auction even started after hearing the sale conditions read; among other things, the buyer is required to replace the metal-framed windows and the sliding glass door to the balcony.

Ostrager, who declined to be photographed or quoted much, said he lived in the area and planned to move into the new place.  That’s provided the board approves the sale.

Asked how he felt about succeeding with his bid, the lawyer responded by saying just this:

“I don’t have any reaction.”

Ostrager seemed like a nice enough guy, but let’s say that he wouldn’t be my first choice for a dinner companion.