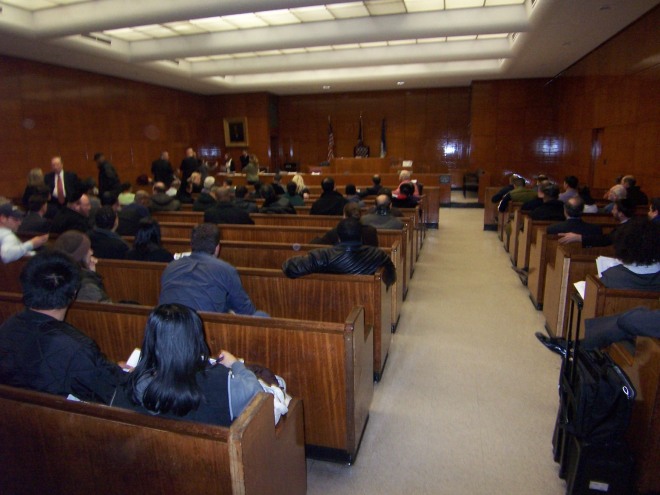 Room 224 in Brooklyn Supreme Court, just before the sale started. The man leaning forward in the blue shirt paid $1.6 million for a house, way above his pre-set limit.

Despite several bids far in excess of minimums bids for 19 properties auctioned yesterday by the Kings County Public Administrator, the sale of properties left by intestate owners fell far short of the lowest potential total.

One reason for the disappointing sum was the absence of bidding for the highest-priced lot, a townhouse and adjoining parcel at 436-438 Albee Square, opposite the City Point development. The opening bid had to be at least $4 million, but no one stirred among the some 135 attendees at the auction, which took place in the Brooklyn Supreme Court building.

In all, the auction raised $4.8 million; had each property sold for only its minimum, the total would have been $9.42 million. Thus, the amount realized was 51 percent of merely all the opening bids taken together. 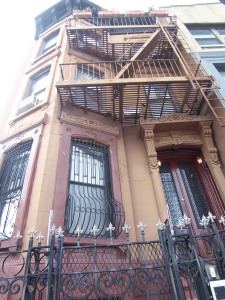 The $4 million flop across from City Point.

Although 21 properties originally were listed, two were withdrawn before the event. That is not unusual, and the numbers above reflect their omission.

From then on, the auction went more or less downhill, and seven properties found no bidders. Below are the results:

Even with the auctioneer raising bids generally in increments no more than $5,000, the event ended in just under an hour at approximately 3:10 p.m.

If you’ve made it this far, I’ll confide a rumor to you: That one of the houses that sold has a treasure buried in the backyard, hidden there by the late owner, according to a friend of the winner.

If so, I hope he gets there before the individual who told the friend.  Hey, I said it was a rumor.