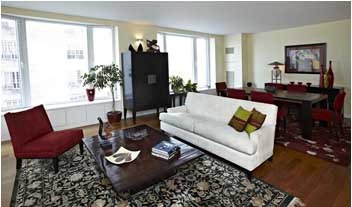 The listing broker denied my client the benefit of photos that I had hoped to take. This is from her Web listing.

Before the late Johnny Carson became the inimitable host of the Tonight Show, he was the inimitable quizzer on a network program called “Who Do You Trust?”

On the first installment, which I somehow caught, he joked about the grammar of the program’s name, which correctly would have been “Whom Do You Trust.”

I was reminded of his quips over the weekend, when, dressed in my usual scruffy Sunday clothes, I made my routine rounds of open houses on the Upper West Side.

One apartment I particularly wanted to see for a client I had in mind was a $3 million condo in the 80s on Central Park West.  Walking into the beautifully renovated apartment on a sunny day, I introduced myself as a broker with Charles Rutenberg Realty.

With reservations, I thought it was lovely as, at that price, it should be.  I wanted to let my client have as much information as possible about the three-bedroom unit, which comes close to her specifications.

Since the view of the park was limited, I asked the listing broker, “Diana,” whether I could take photos.

Huh?  That’s a first in my years in the business.

True enough, but why wouldn’t she want me to take my own photos, I wondered?  For a nanosecond.

I hadn’t perceived anything that Diana would want to hide, except the questionable but potentially acceptable exposures from the living room and master bedroom.  Since she wouldn’t even shoot the views, was she intent on hiding a defect?

Wait: She must have thought I wanted to use the pictures to create an open listing that would at minimum be a breach of broker ethics without the owner’s permission.  Were anyone to attract a buyer that way —  in which agents basically pretend on the Intertnet and sometimes elsewhere that the property is theirs to sell — she’d have to give up half her commission on the place.

In round numbers, that sum would be $75,000.  (Diana would have to “lose” that part of the fee if I, rather than her, brought in my intended buyer and went to contract.)

It’s nice to be trusted, but she evidently doesn’t’ feel that way.  Or appreciate that the sword often cuts two ways.

I can’t think of another reason than her distrust of me that she would decline my request.  Nor can I imagine why we real estate brokers should continue to put up with such avarice.

In a world in which real estate brokers don’t trust each other, often for good reason, is it any wonder that consumers eye most of us with deep suspicion?

One thought on “The High Road: Who do you trust?”