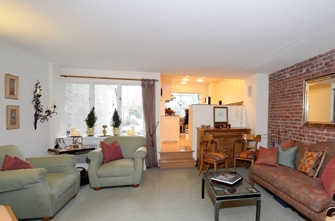 This triplex is a festival of full and partial staircases, such as the two steps into the kitchen photographed from the dining area, which is two steps above the living room.

Gorgeous properties priced well can linger on the market forever, and there’s little for a seller to do but offer a bargain instead of fair market value in order to attract offers.

Such is the issue with apartments that can tempt only a fraction of the potential market.  They have characteristics that cannot be changed or at least changed for a reasonable amount of money.

They await the buyer who has the same preferences as the seller, and they are few and far between.

Manhattan co-ops and condos that have, say, unusual flooring, nearly immutable layouts imposed by the owners or features rarely found have their appeal — but only to a very small segment of the market.

I’ve touched on this subject before, but I was reminded of the issue in the 70s between Columbus and Amsterdam avenues on Sunday when I viewed the nearly $3 million triplex pictured above that had a dizzying array of staircases .  I’ll go into details in a few weeks.

The same concern arose when I entered a lovely 1,800-sf corner apartment on West End Avenue in the low 70s a few weeks ago.  The aesthetic is described as “downtown loft.”

With three bedrooms, two baths, average closet space, skim-coated walls, open views west and north, stunning kitchen and location on a high floor in a 1925 building, this airy co-op was impeccably renovated four years ago.  As owners do, these sellers have a particular individual taste.

Unfortunately for the sellers, few are the buyers who will like the choice they made for the new flooring, which is handsome solid oak.

That the oak is wide plank in a neighborhood in which narrow-strip or parquet flooring predominates is one of two obstacles.  That decision will eliminate the majority of buyers at the unit’s price point — $2.395 million with monthly maintenance of $3,600, reduced from $2.55 million last month — and the consequence will be a lower price than such an apartment normally would command.

The second issue with the floors is the finish, which is matte.  I happen to favor matte over glossy, but I’m in the minority.

Although it is relatively easy and inexpensive as things go, refinishing the floors is an option that most buyers in that price range might undertake.  But many buyers are just unable to envision how a property on the market will look when modified, thereby providing another reason for lessened appeal and a lower price.

Another questionable part of the renovation was making the dining room into that third bedroom.  It is a reversible alteration, which turns meal service into a hike past two bedrooms and a bath.  While not fatal, the modification certainly limits the market mostly to families trying to squeeze too many children into too little space.

The lesson: Think twice when making essential changes that depart from universal appeal.  In other words, it’s not enough for the change to please you: It must tempt tomorrow’s buyers as well, unless you embrace financial irresponsibility as a pillar of your personality.

It is hard to imagine that someday you will want to sell the home that now calls your name.  But sell it, you will.  Why not plan on receiving top dollar?

Below are some of the properties that I have recently visited and that are listed by various brokers:

One thought on “Out and About: Universal appeal is a winner”