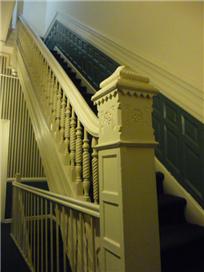 This photo of a brownstone

Because we are moving into August, there will be just one more Out and About before Labor Day.  But you’ll find other posts, published somewhat less frequently than usual, until then.

Have a look at the photo at the left and consider how much you approve of painting over antique woodwork.

Having seen that wonderfully ornate woodwork, I suspect that someone has monkeyed with the photo. In person, I was turned off by many layers of paint that obscured the detail and failed to cover up numerous underlying flaws.  (Unfortunately, the photo doesn’t do the bannister injustice.)

It seems clear that the paint, as usually is the case, was a cost-saving shortcut that, to my mind, only amplified the defects in the woodwork. How lovely that ornamentation would have looked when repaired and polished. But how expensive the project would be.

Such corner cutting is typical of what I see in turn-of-the-century brownstones that have been divided into apartments, and I think that the measure is a short-sighted shame. 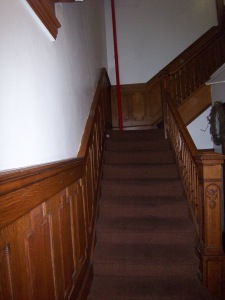 This lily obviously has not been painted.

I took the photo at the right, and I am sorry to say that it doesn’t come close to conveying the beauty of the brownstone’s interior. However, to my way of thinking, the authenticity of even faded glory is far superior to the artificiality of the gloss that too many antique interiors have had to suffer.

I suppose it is understandable that those who resort to wielding paintbrushes likely are inclined to act more out of a sense of economy than of aesthetics. While they seem to have little regard for historic preservation, perhaps they are less avaricious than pragmatic about their limited resources.

So, uncharacteristically, I don’t and won’t condemn them.

I just wish it could be different, you know, like I long for no more war, poverty or demagoguery. I can wish, but I’m realistic enough to know that the kind of changes I favor just ain’t gonna happen.

Below, you’ll find other listings I encountered on my rounds of open houses held by various brokers: