See you in the New Year.  Happy holidays!

One of my favorite posts.

Consolidated Edison is a profit-making business.

It paid $2.38 in cash dividends per share last year and declared a 60-cent per share quarterly dividend two weeks ago.

Those dividends resulted from $13 billion in annual revenues and $36 billion in assets. Yesterday, Con Ed closed at $56.11, pretty close to its 12-month high approaching $57.

I got to wondering about such things after

I actually read the back of my monthly electric bill for the first time. The breakdown of my charges that the utility provided initially puzzled and then began to annoy me.

For example, there are three components of “my” supply charges, five of delivery charges and three of taxes.

Among the decidedly odd conglomeration of charges are those that comprise items including “credit and collection related activites and uncollected accounts,” plus “customer related service, including customer accounting, meter reading and meter maintenance.”

Aren’t those and other sums part of the cost of doing business? Why stop at those costs?

I don’t see any mention of profit, the millions of dollars in executive compensation in the annual report, or office expenses from paper clips to messengers.

Naturally, I called the Public Service Commission (PSC) in Albany, where spokeswoman Ann Dalton and Marco Padula of the rates office were most helpful.

“Part of the problem is that electricity is not something that can be put on the shelf and stored,” Dalton offered. True enough, but I’ll try to make clear what is hard to explain. 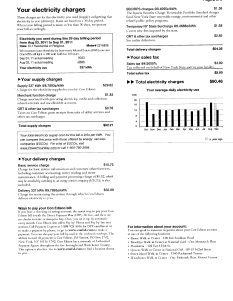 In essence, said Padula, the bill reflects what I ultimately volunteered was “shorthand” for all the elements that go into rate-setting. “If you buy a car for $10,000,” he added, “you don’t see all the costs that went into making the car.”

They noted that we are seeing the result of the PSC’s having unbundled the supply and delivery of electricity in the state, allowing consumers to use different companies for either function.

To help consumers choose their preferred supplier or deliverer, the PSC’s officials added, they need to know the components of the supply or delivery charges: Customers may decide which utility companies are more or less efficient or desirable by comparing their charges.

“It’s a representation of all the costs that the company has to serve a customer,” Padula said.

So, the included items are related to rate-setting and the separate costs of delivering electricity and supplying it. For instance, if there are deadbeats — and of course, there are — their use of electricity has to be spread among those of us who pay our bills, the PSC reasons.

Companies have a responsibility to minimize the burden on all of us, and thus the cost of dunning customers is added to the rate on the theory that we benefit from the process. Otherwise, our rates would be even higher.

In contrast to included items, expenses such as executive compensation are excluded, though, of course, there’d be no company without a CEO and consequently no way for the electricity to be supplied or delivered.