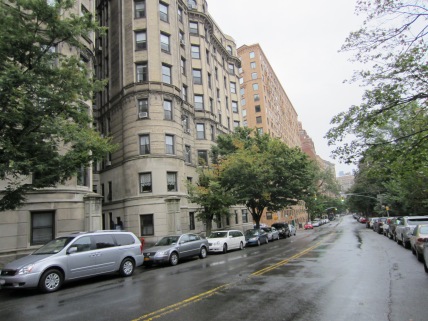 In some circles, Riverside Drive has never quite measured up to the desirability of Fifth Avenue or Central Park West, even though it was designed by Frederick Law Olmstead.

But residences on the tree-lined serpentine roadway, which runs from 72nd to 181st streets along Riverside Park and the river beyond, are much in demand.

Lobbies, like this frosted beauty at 180 Riverside Drive, were designed to impress.

With many of them selling at a premium, the apartments in stately pre-war apartment buildings and converted mansions, for the most part, have boasted among their occupants notables such as Damon Runyon, George Gershwin, Sergei Rachmaninoff, Hannah Arendt, Saul Bellow, J. Robert Oppenheimer and Paul Krugman, according to Wikipedia.  My former sister-in-law and brother-in-law live there, and my first home in Manhattan was there as well, at No. 425.

When I checked one day last year to see how many apartments were available on Riverside Drive, I found 83 ranging in price from $250,000 to nearly $14 million, the only one in eight figures, or a little more than 1 percent.  (Today, the highest-priced property is listed for $13.95 million.)  There were but 10 between $2 million and $10 million, 18 between $1 million and $2 million, and the remaining 54 were under $1 million.

Schwab Mansion, which occupied the full block between Riverside Drive and West End Avenue and 73rd and 74th streets before it was demolished in 1948 and replaced with the behemoth below. (Source: Library of Congress)

So, on Riverside Drive more than a month ago, I found that 53 percent of the available co-ops and condos had asking prices above $1 million

A few units were listed in the six figures above 116th Street, but the preponderance of the higher-priced apartments on the market always exists below that point (though not to the exclusion of much more modest ones).

In contrast to Riverside Drive then, Central Park West had 70 percent of its listings above $1 million.  Moreover, the street cutoff between generally more and less expensive apartments is at 96th Street, much farther south than on the Drive.

I’m not going to try your patience by examining Fifth Avenue listings, but you can be sure that the difference between it and Riverside Drive is striking.  (Let me acknowledge that any analysis of all the differences is pretty crude but arguably nonetheless telling.)

Refigerator is outside tiny, dated kitchen.

Prior to the day that I looked at the statistics, I found myself returning to Riverside Drive in the 90s while making my regular rounds of open houses for newly listed properties on the Upper West Side.

Because 105 apartments were jammed into the seven-story building when it was converted to a co-op in 1985, the rooms in all the units tend to be undersize, especially the kitchens, which generally lack windows.  So with most of the baths, which also are small interior spaces.

Layouts in the building often are on the weird side, some with too little closet space and others with too much (yes!); some with bedrooms that dwarf lilliputian living rooms; some shaped liked a barbell; some with totally obstructed exposures; and some with nice views of the Hudson.

Unsurprisingly, the one-bedroom unit that I least liked was the cheapest.  Although it has exposed brick walls in the bedroom, its living room looks south onto. . . more exposed brick.

The kitchen has mini appliances, there’s room inside to make little more than a pot of coffee and the bath has the first use I’ve encountered of subway tiles running lengthwise up the walls, rather than the traditional (and appropriate) horizontal design.

The asking price strikes me as pretty much on the mark.

The one I preferred was listed at $560,000 with maintenance of $840 a month, partly because it was the only one in the one-bedroom apartments with a renovated windowless kitchen that is of reasonable size, having both stone countertops and quality cabinetry.  (It is the one just above to the left.)

Other of its pluses are an above-average amount of closet space, big-enough rooms and exposures that qualify as open.

The most expensive of the one-bedroom co-ops was offered for $615,000 with $900 maintenance.  Although a bedroom window overlooks the Drive, the lone window in a corner of the living room faces a brick wall.  Moreoever, both the kitchen and bath I found to be wanting in terms of both size and quality.

I also saw an attractively improved two-bedroom, two-bath duplex on a low floor that has everything but a big kitchen.  Its price was $825,000 with maintenance of $1,185.  I’ll bet the 1,000-sf apartment is under contract when you read this post.

By way of contrast in appeal, I expected another two-bedroom, two-bath co-op in the 90s, this one a couple of blocks south, to be gone as well.

But the second bedroom, separated from the living room by pocket doors, really ought to be used as a dining room — and looks that way.

In any case, this place had an asking price of $1.35 million with maintenance of $1,827.  It was well worth that sum and now is under contract.