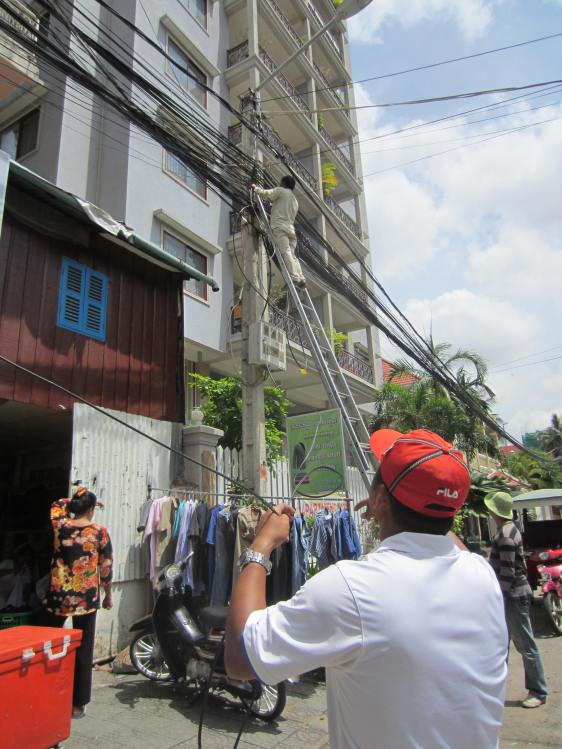 Stringing cable looks like a freelance procedure.  You should have seen them flinging spiraled wires over obstacles such as other wires as the mercury climbed into the 90s.

One of my biggest complaints about the apartment we rent was my reliance on the building’s slow Internet service, which costs $50 a month for shared WiFi.  Downloading videos of any length has been basically impossible, never mind privacy.

I am embarrassed to say I learned only lately through a casual conversation with a new tenant that it is possible to bring in another service.  Eureka!  It never occurred to me to ask.

Paid in advance, the price for Mega’s product is expensive by U.S. standards, $600 a year, including $55 in taxes.  Unlike my building’s approach, I’ve had to commit to and pay for an entire year in advance.

But it is worth it to me for the 2 MBS speed the company promises.  So far so good, according to a site that gauges performance as well as how fast I can flip between Web sites and their links.

Given that the company actually goes down to the street to bring in new cable to install WiFi in our apartment, I don’t see how I can complain about the price. 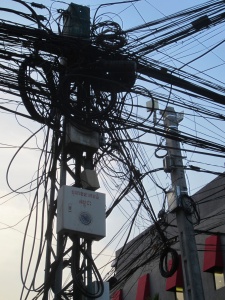 No one gives a second glance, understandably, I suppose, to the tangled eyesores on virtually every corner. (That’s my gym with red awnings in the background.)

Still, I came close to complaining when it was a full 24 hours before the thing functioned. The company’s sales and technical reps contended that the fancy new router I had purchased last fall in the U.S. and never used was at fault.  They finally insisted that I had to buy — from a “friend” of theirs who owns a shop — a particular brand (TP-Link) for Mega’s modem to work.

Although I am certain that the shop provided each of them with kickbacks, I had no expertise to figure out whether they had stacked the deck.  An acquaintance subsequently told me that only three brands sold in Cambodia are compatible with modems here.  One thing is certain: I am $70 poorer for the new device and $25 poorer in tips.

I bought the thing after two to four of Mega’s best worked for an hour in the morning and virtually all afternoon trying to connect me to the Internet. Since they finally did, I’m pretty impressed with its speed. Maybe now I can see my old favorite TV shows, new ones and movies that don’t center on blood and guts.

With regard to my new cable, the photos above and below demonstrate that stringing lines seems to be something that almost anyone does and can do.

I suppose with monsoon rains that I am told will send water to mid-calf, overhead wires make more sense than drowned ones.  But they are, of course, an eyesore.

The change in Internet provider helped tip the balance of deciding finally to stay in our apartment after ranting about its defects on this blog and with anyone who would put up with my ravings.

The other major issue — the din from the demolition and reconstruction of the apartment over our heads — has resolved itself at last: The work is done, but only after six months of torture.

Another factor was my perception that our well-situated place is a relative bargain, what with the swimming pool on the roof, our two bedrooms and unobstructed views 11 floors from the street.  We also enjoy cross-ventilation and overhead fans, enabling us to forego air-conditioning so far. 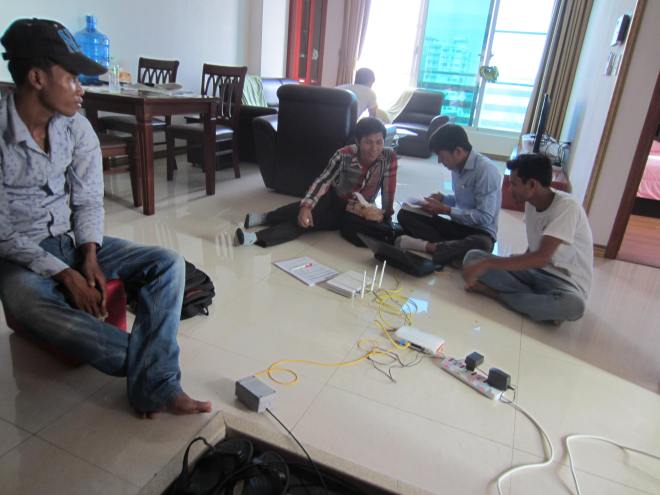 The tech in the middle bent over his computer spent nearly half a day vainly making my new ISP function properly.  It took part of another morning and a purchase for it to work.

We’re paying $1,000 a month to live here.  Other units that we saw of similar vintage in the neighborhood required compromises such as these: having no pool; facing next-door lots with construction that not only would be cacophonous but also finish with walls we practically could touch; or lacking a workable kitchen — though ours barely meets that test.

As for the new luxury buildings we have been eyeing, they are starting to rent.  But we’d have to pay $300 or $400 more in our highly desirable neighborhood for less space on lower floors. At least one such building has great interiors.  However, occupants of the $1,400 one-bedroom on the second floor have to endure daylong playground clamor or the construction just beginning of a 13-story condominium maybe 10 feet away.

(The developer has for years been trying to sell out our building, which has dozens of apartments meant to appeal to investors.  Ours is on the market for $176,000 and change, and I’ll restrain myself from commenting on the amount versus the sum our two-bedroom co-op fetched in Manhattan.)

So the anxiety of where to live next has evaporated: We’ve signed a new lease.

With that load off my mind, which I hope will begin functioning normally again by remembering to question everything, life can go on for what now passes for normal.