My hot and sour soup was doubly good.

Seasoned travelers learn quickly that merchants and money changers may well reject U.S. currency that does not meet their standards.

A tiny tear, too much wrinkling or an unsightly smudge may well upend a transaction.  The New York Times’ Thomas Fuller has an amusing video on his problems changing money in Myanmar.

As someone who has traveled far and wide and worked on introducing newly designed U.S. currency to the world, I accepted a crisp $2 note unthinkingly in change from the driver of a motorbike with whom I had ridden to the Riverside neighborhood of Phnom Penh.  (I rarely take advantage of such casual “taxi” services such as motos or tuk-tuks.)

I guess I was so intrigued by the appearance of that denomination, which I never have seen here in Cambodia and hadn’t seen in the U.S. for quite some time, that I neglected to consider the consequences.  Just try to unload a $2 note in this country, which views unusual or marred currency circumspectly.  Heaven help us expats when the U.S. introduces its new $10 note in 2020.

First, I tried another motodop, who turned me down with a satisfied smile.  Then I sought to give it to a merchant.

The fancy restaurant where I “dine” regularly, usually sharing a table with strangers.

After several other attempts, I managed to pay the bill in its entirety for my lunch of hot and sour soup at a small eatery that I favor; unimaginatively named Chinese Noodle Restaurant, the establishment can be counted on for deliciously filling meals.  (No, my choice of food was not perverse; usually, I have noodle soup with mushrooms.)

Let’s just say that one virtue of the place is that they make their own noodles verging on the sidewalk (visible at the lower left in the photo immediately above) in front of the restaurant. And a second one: They are always busy. 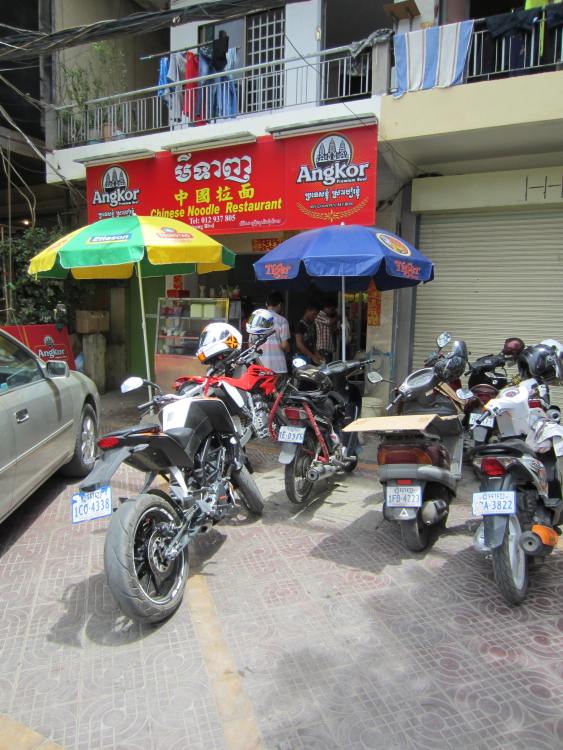 Busy good: I slipped the note to a waitress in full payment of my lunch.  Then I fled like a thief.

Yep, my flight of hand worked beautifully, albeit halfway across the bridge to immorality.