If like me you never have heard of Abadá-Capoeira, which is Brazilian martial arts, you are missing something special.  On a whim, I was lucky enough to catch a free performance featuring half a dozen of its athletes at the French Institute last weekend, and the event was enthralling.

While the activity clearly is a sport, it is one more like a performance absent any contact, except by mistake.  Abadá-Capoeira manages to combine the thrusts that remind me of jiu jitsu with the grace of dance.

With a name that I have no clue how to pronounce, the activity has its origins in Angola and now is available around the world.

“Centuries ago, it was practiced by African slaves brought to Brazil by the Portuguese,” participant Fabien Coulon explained in the Phnom Penh Post prior to the performance that I caught.  “Since they were not allowed to train to fight, they concealed their martial art under dance.”

Though its existence in Cambodia eluded me until now, the non-profit group apparently has grown over the past several years.  On its Facebook page, Abadá-Capoeira describes its main objectives as the promotion of capoeira, social integration and individual growth. 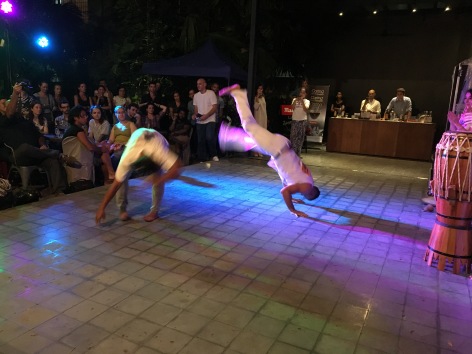 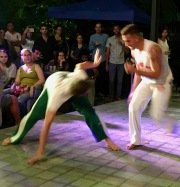 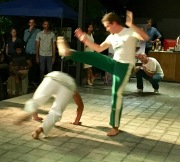 What could be better than that?  I hope you enjoy the photos. 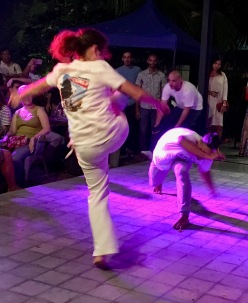 If you are following my blog from far away, you may imagine that Phnom Penh’s diversions such as Abadá-Capoeira are few.

In a sense, that is true.  Yet on the weekend I saw Abadá-Capoeira, I also went to two small art exhibitions and caught a choral concert of classics from the late 1930s onward and including such hits as Stand by Me, Over the Rainbow, Singin’ in the Rain, I Dig Rock and Roll Music, and We Are the World.

Still, there is no symphony orchestra, museum of modern art or really any large-scale or professional theatrical productions.   While dance often is performed, even the biggest venues can accommodate an audience of no more the few hundreds.  And of course, what they call football everywhere but the U.S. fills our Olympic Stadium along with local bars from time to time.

Yes, there is plenty of entertainment for those who seek it out, and I confess that I do have to push myself, with mixed success, lacking the lure of a Broadway hit or a musical superstar.  Those limitations mean that many expats head to saloons at night, and though I am no teetotaler, I avoid them here like the Venus Flytrap.  To me, bars can be a void that will swallow anyone over time, particularly expats.

“Have just one more.”

“Where do you want to meet tomorrow?”