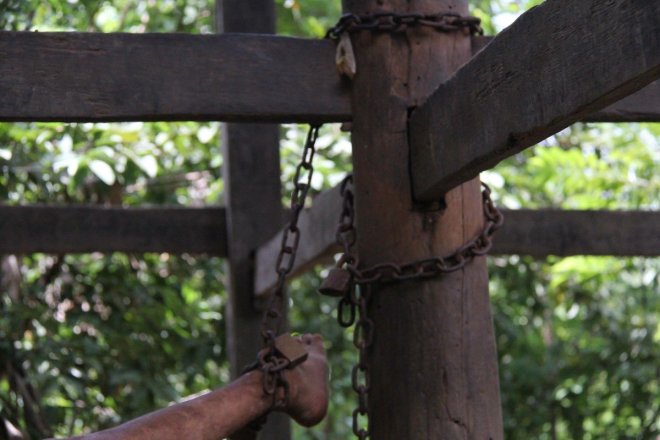 Purportedly mentally ill man is chained by his leg to a support in an abandoned house in one of Cambodia’s provinces.  Source: TPO (or PTO) via Twitter

The first two photos in this post are said to have been taken in Cambodia, but I cannot vouch for their authenticity, date or anything else about them.  They showed up in my Twitter feed with “PTO” as the source but, in a subsequent message, corrected as “TPO.”

Whether as real as they appear to be, the photos strike me as emblematic of how misunderstood mental illness is in Cambodia, how inadequate is its treatment and how brutal can be efforts to control severe cases.

Below is the second photo in the Twitter item, included only below because, in my opinion, it is far too sensational to put at the top. 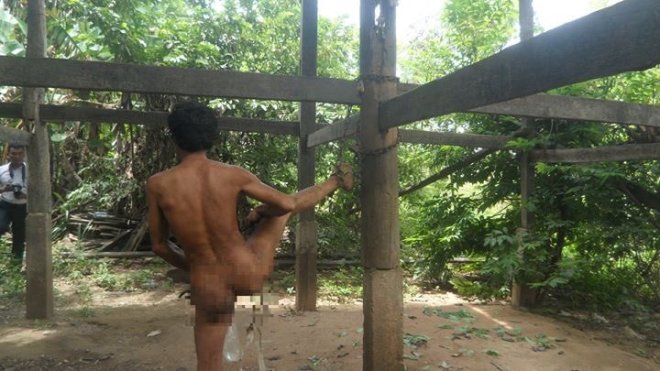 Full view of man shown in photo above.  Source: Same as photo at top

Mental health in Cam-a man about 50 years old, his leg was tied up with a chains hanging up with the pillar of the old abandoned house, with broken roof in the forest of banana. He is a person who is violent, aggressive, harmful, and naked.

(Mech recently quit his reporting job on principle at the discredited Phnom Penh Post, which used to be a major source of unbiased news in English, without another job lined up.  If you need or know an organization that can use his considerable talents, please don’t be shy.) 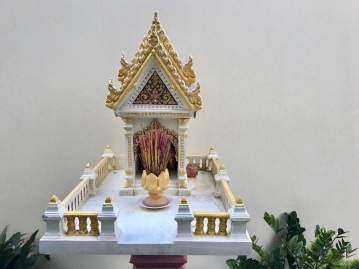 Spirit house near the entrance of my apartment building.

Aside from Mech’s reputation, there is good reason to think that the photos are worth our attention.  (I happened to meet him after I drafted this post when I overheard a conversation while having coffee.)  One reason for taking them at face value is that I occasionally read about villagers killing individuals thought to be witches or sorcerers in the wake of adversities ranging from crop failures to widespread illness. Curses are widely feared.

Even where I live in Phnom Penh, I encounter educated folks who respect spirits.  There are spirit houses in most abodes, in stores and on sidewalks.  Often, mostly on holidays, food is offered to spirits.

Sometimes, white fabric cutouts representing ghosts can be seen waving from the entrances to Buddhist temples during funerals as well as other occasions.  It is useful to bear in mind that Cambodia is officially a Buddhist nation in which belief in ghosts is widespread, and 95 percent of the population labels itself as Buddhist.

At the entrance of a temple where a funeral is taking place, the hanging figure represents a ghost.

There is hardly any confidence in or understanding of psychotherapy, and only a tiny amount is available.  Instead of modern treatment when someone acts “crazy,” extreme measures such restraints are employed as long as 24 hours a day.

I cannot conceive what life is like for the poor soul in the photos,.

Nor do I have much confidence that change can come quickly for everyone who suffers from mental illness in a country where post-traumatic stress disorder (PTSD) following Cambodia’s genocide runs rampant.

Undeniably, it is a sad state of affairs.

One thought on “Mental health little understood in much of Cambodia”