They remind me of my Uncle Herman, who was a butcher married to one of my grandmother’s four sisters.

In my mind’s unreliable eye, I remember him working from a pushcart outside a market in Boston’s Haymarket Square.  There was an associated store just behind him as well, and I’m pretty sure it had sawdust on the floor and butchers in bloodied white aprons.

I know Uncle Herman called me by a pet name that I recall was “Stretch,” not that I was particularly tall.  My much younger, and thus shorter, brother he called “Shorty.” Or was it “lamb chop?”  (Hang on, please, I’ll get to the point.)

Well, I think it was Uncle Herman who did that, unless it was my best friend’s father Eddie.  I always considered Eddie’s wife Edith to be my second mother.  She and their sons Joe and Steve lived in the apartment next to my family’s in Brighton, Mass.  Joe was born 16 days before me.  We became chums at the same schools and fast friends who still are in touch with each other.

Of course, it is the photos that caused me to recollect Uncle Herman and those times.  The subject of the photos also calls to mind the connection between Cambodia’s capital and New York City’s Orchard Street in the old days.  To me, the similarities are inescapable.

There was a whole string of vendors near one construction site after work hours, one or two others of which are visible in the distance. The fellow in the foreground is selling sugar-cane juice.  Temporary worker residences are at right above the stores across the street. 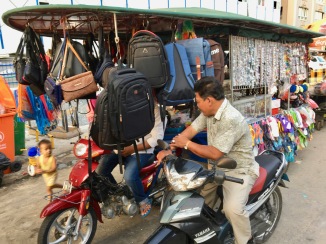 In my opinion, there is little difference between my memories and the peripatetic vendors of merchandise, often into the night.  Some of their wares seem as comprehensive and varied as a general store’s.

Mobile vendors do not restrict themselves to merchandise.  Sellers of street food throughout Asia are more or less the same, and you might well say that food courts and food halls around the world are just an extension of the other wheeled vendors, especially in Singapore.

Bangkok, with its famously safe and delicious street food, is one of many cities in Southeast Asia where mobile vendors abound.  Phnom Penh directly below.

In Phnom Penh’s sprawling local markets, Cambodians selling a variety of goods and produce operate from stalls or carts that could as easily be outside as under a tin roof. 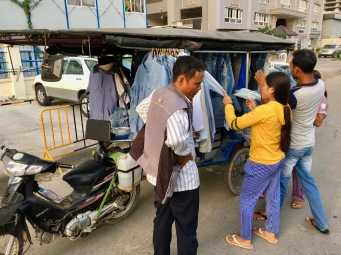 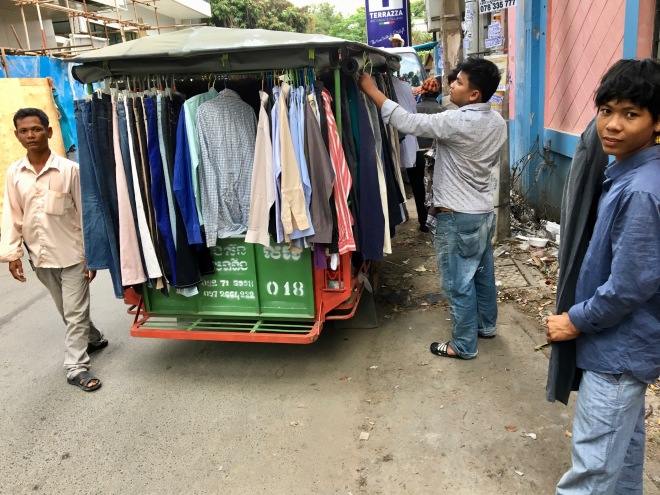 Outside another construction site in Cambodia’s capital.  Since most of the workers are international immigrants or domestic ones from farm country, it is the sort of location that clothing vendors favor.

Such street life adds a soupçon of vibrancy to any city.  However, in the eyes of certain governments — here, for example — the trash plus the sidewalk and street congestion that results from open-air vending, particularly food, make the practice officially unwelcome.

They are banning the sellers from areas where the public congregates.  Think about that for minute.

That’s true elsewhere in Asia; the authorities have increasingly been cracking down in Phnom Penh and Bangkok

A vendor heads out for the day (and likely for the evening as well) from a shophouse where several vendors park overnight.

I have written before about the park I walk around regularly in central Phnom Penh.  There’s still a lively mix of sports and dance activities, but the hundreds of Cambodians who used to picnic with food from vendors who ringed the park now have virtually given up al fresco dining. Even the numerous sellers of popcorn are gone.

Those absent street “restaurateurs” undoubtedly have suffered.  Where have all the vendors gone, long time passing?

Gone are numerous street food sellers around the park.

There were plenty of seats for diners, though some took to thin mats. A few souls take out food from nearby vendors to eat on a bench or sometimes on a mat, but they are few.

The atmosphere has suffered too.  It just isn’t the same for me.

Trivial as it is in comparison to lost income, I miss the way it was.  The loss of vibrancy, the energy that tourists and I celebrate, is significant.

For the generally lower-class families who throng the park, however, the loss is greater.  The options for favorable sites to socialize in the evening are fewer than ever (and the remaining ones are more crowded than ever).  At the same time, the  small elite class now can travel around the park in their hulking SUVs at marginally faster speeds.

We all recognize that life is a series of tradeoffs, but the decision to sweep away street vendors strikes me as shameful.