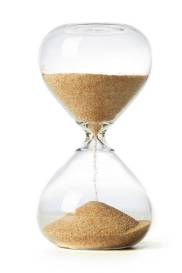 In the 10 years since I began blogging, I have posted on this site my insights, quibbles, news, analyses, complaints, observations and random thoughts.

The blog evolved from the darks ages, when I emailed (then e–mailed) a weekly newsletter about real estate in an effort to market my business as a broker.  Its name changed from “Service You Can Trust” to “I, on Cambodia.”

Although I will not take down the blog or change its name, there are several reasons that I expect to cease working on it:

When I think back to my impressions of Cambodia, I wonder at my naïveté and the simplistic observations that I, however well traveled, related as a new resident of a nation that is much less advanced than the United States in numerous respects. 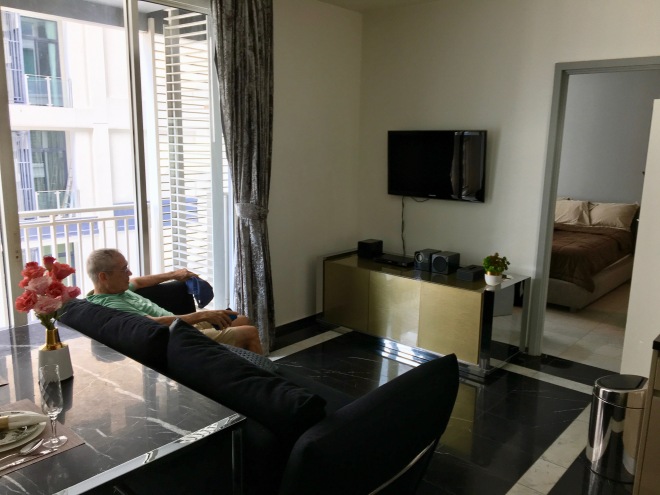 Rear window: On our first visit to check out what has become our new furnished apartment, which is bright despite views blocked by the building next door, like New York, I tried out the sofa. Fortunately, it was pretty comfortable.  (That’s a phone, not a remote, in my right hand.)

After debating our move for a couple of years, several factors influenced our decision.

First, the political situation in Cambodia and its attendant corruption disgust me.  Repression of human rights, election irregularities and the absence of the rule of law are inescapable, and they offend me.

Second is the related chasm between the overwhelming proportion of the population that is impoverished as opposed to the tiny elite class, which is composed almost exclusively of the ruling class.  This Grand Canyon of need on the one hand and extravagance on the other troubled me on a daily basis.

With their growing number of Rolls-Royces and Lamborghinis, villas the size of palaces that are replete with golden gates, and rampant airs of entitlement, the privileged members of Cambodia’s society evince no sense either of guilt or of responsibility for their neighbors except in token gestures.  (Even a $1 million donation amounts to a token for many of them.)

Evidence of the gap is everywhere — adults and children who are stunted because of malnutrition; women lugging bags of bricks at construction sites; child labor evident everywhere; eyes evidently deadened by some combination of fatigue, hunger and hopelessness.

Third, the growing influence of China and the astonishingly greater presence of mainland Chinese has changed the personality of Cambodia and not in a good way.  It also has changed the urban and rural landscapes.

Sihanoukville, once a pleasant, if a somewhat seamy, beach resort, is now overshadowed by numerous Chinese-owned casinos, some of which arrogantly impinge on the waterfront, and its bathers.  Whatever charm or recreational opportunities that existed have disappeared.

I don’t know any expats or Cambodians who go there any more as opposed to just a couple of years ago.

Moreover, mainly Chinese money has turned too much of Phnom Penh into a city of skyscraping tombstones, money laundries with windows that are black night after night and wide façades with none of the interest that traditional slim shophouses can provide.

Fourth, Phnom Penh would cease to fascinate me even if it hadn’t changed so much.  We moved there from Manhattan, and for a while the stark differences were stimulating. However, Phnom Penh came to feel to me like a village, though of course many expats experience the capital city in other ways and doubtless have worked harder to enjoy its diversions, of which there are many.

I have heard a number of expats say how much they “love” Phnom Penh, and I find myself always having been mystified by their level of affection for the city, more so now.  Likely my shortcoming.

The move to Bangkok itself could not have been easier.  One way or another, we got rid of most of our belongings when we left New York.  Now, everything fits into four large suitcases and two carry-ons.

What I will miss most is the friends I have in Phnom Penh.  Yet we will keep in touch via the Internet and visits in two directions.  (We already have a trip there planned at the end of March, and two or three friends are headed here before that, not just to see us; flights are quick and cheap.) 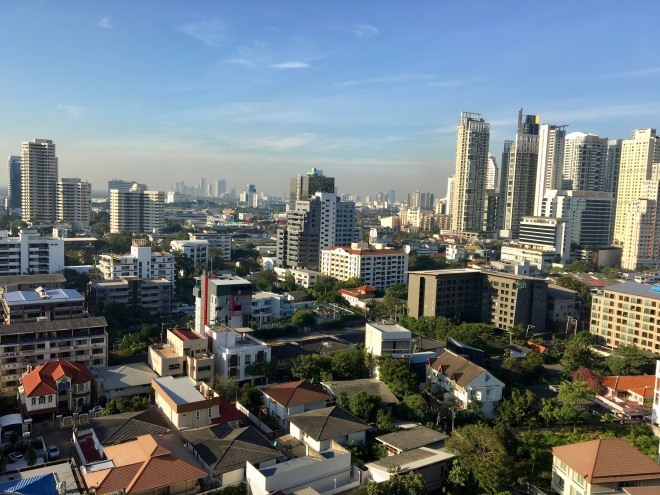 View of Bangkok on a day without so much air pollution, except in the distance.

Bangkok is a far bigger city and more cosmopolitan with many more things to do, to see and to try than Phnom Penh.  The energy in the center of this city feels to me a bit like New York.

One way it tends to be unlike New York was driven home to me twice within a week.  I lately have read on Facebook a few accounts of honest Thais who returned money or valuables to expats.  In fact, a visiting friend accidentally overpaid the taxi driver who transported her from the airport.  He returned the cash — 1,000 Thai baht, more than $30 — at her hotel the next day.

I had a similar experience when I left my cellphone on the table where I had lunched on street food on Wednesday.  The proprietor kept it for me until I returned a half hour later.

In addition, Bangkok has parks that are not mainly cement.  Walking around an expansive one steps from our apartment the other evening, I marveled at a range activities in which Thais and expats indulged themselves; fully grown trees, grass, flowers; an appealing pond; and approachable stray cats.

Here, there also are streets lined with mature trees that have not been severed to accommodate new construction for the wealthy, international products in close-by teeming malls and an appealing Foreign Correspondents Club, which I intend to join.  Nor have we explored very much of the country itself during several previous stays.

Fifth, having had to fly to Bangkok for emergency surgery when I broke a hip in July (about which I ran a four-part series in this space) and having suddenly begun to feel my age, I reluctantly came to appreciate that being close to the high level of health care that Thailand affords has become increasingly important to me.

Thailand admittedly has some of the same issues I noticed in Cambodia, but they are less intrusive to me than they were in Cambodia.  I could be wrong, but the total of perhaps three months we spent here before moving suggests otherwise.  I have been practicing the technique of turning a blind eye while confessing my guilt at doing so.

Indeed, recent political developments in Thailand, which faces elections on March 24, concern me.  But I am paying less attention to them than I paid to the political situation in Cambodia.

The contrasts largely come down to a matter of degree.

Logistically and emotionally, we have committed ourselves to spending at least the ensuing five years in Bangkok, where we like our furnished rental apartment exactly in our desired central location and where I have joined a superb gym, which is five minutes from home and is the best one I ever have seen.  (Virgin Active, if you might be interested.)

I knew that it would cost more to live in Bangkok than in Phnom Penh, around 20-25 percent more for our apartment, nearly twice the cost of my old gym, less for food (which is famously delicious and safe from street vendors).  On average, I estimate living here will be 10-15 percent more expensive than Cambodia was.

One important consequence of living in Thailand concerns currency exchange rates: U.S. dollars are virtually interchangeable with Cambodia’s riels and not worth any worry.  In Thailand, however, we must pay careful attention to the rates, which fluctuate quite a bit, and disadvantageously versus the not-so-distant past.  Most, if not all, banks actually take a percentage of any funds withdrawn from a dollar account.  I think some charge for deposits too, and they don’t make it easy to open an account.

Another key difference concerns visas and bureaucratic nuisances.  I won’t go into the details here, but suffice it to say that Cambodia is far more welcoming to expats in terms of acceptability, costs and reporting requirements than is Thailand.

But our quality of life so far feels twice better than what it was in Phnom Penh.  Up to now, our move undeniably has been worth it.

Now, alas, I’ll be learning another language spoken in only one country. Shoudda moved to Canada?

2 thoughts on “All things good, bad or indifferent must come to an end”