There is no end to the number of food carts in Phnom Penh offering everything from fried noodles to crisp insects.

When I walk a few blocks up the street, I spot vendors of coffee, soft drinks, bread, fruit, those noodles, something like hotdogs and barbecued animal parts, of which only some am I able to identify.

Outside the French Institute, I have seen a man making crepes on a contraption that he somehow has mounted on a motorcycle.  Someone sells pizza cooked in a wood-fired oven on a bulky portable cart.

But only in that last few weeks END_OF_DOCUMENT_TOKEN_TO_BE_REPLACED

On a day of announced protests last Sunday, police and soldiers mostly just hung around a busy intersection that is flanked by high-end malls.

It was only on the day after our arrival in Thailand that we saw any soldiers — four of them routinely directing normally busy traffic.  No one paid attention to them, and they were as casual and seemingly bored as supermarket cashiers. 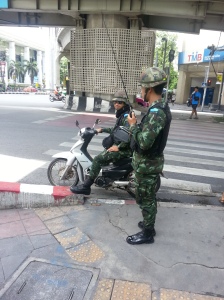 On Sunday, our fifth and final day in Bangkok, however, the announcement of protests scheduled for busy intersections and upscale malls, a few of which were closed, resulted in a show of force.  By closing two Skytrain stations and gathering at intersections, the authorities kept protests to a minimum and hardly inconvenienced tourists, except those hoping to browse the shuttered malls.

I remember reading about a single arrest, for someone using two fingers in a peace sign as her presumed symbol of objection to the military coup. (I may have missed a couple of others.)