Having reported on and attended in other capacities an incalculable number of parades, festivals, street fairs and similar special events, I have become rather jaded about them.

But the 2017 Thailand Tourist Festival —  which this year apparently replaced a celebrations of the Lunar New Year in Bangkok’s Chinatown in tribute to the memory of the late king — blew me away.  By changing the focus, the government felt able to respect the year-long mourning period since his death last fall. 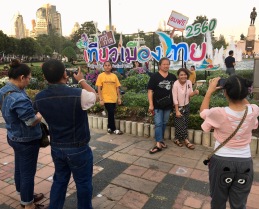 The event in the city’s centrally situated Lumphini Park took place from last Wednesday through Sunday.  It was a triumph of organization, diversions and civilized crowds of almost impenetrable size on the weekend, somewhat less thronged before then.  I was there on three days.

The organizers had divided the space according to five of the country’s regions, plus a section devoted to China.

I very much enjoyed END_OF_DOCUMENT_TOKEN_TO_BE_REPLACED

Honoring our ancestors are, from left, our new Canadian friend Barbara (whose husband was traveling for work), 17-year-old Mai (the family’s youngest) and me.

On the sidewalks outside stores and schools, in front of homes and in private settings, Cambodians of Chinese extraction paid tribute to their ancestors Thursday on the eve of the Chinese New Year.

Fires burned in small containers, and the pretty unpleasant odor of paper being consumed was inescapable in Phnom Penh.  To ensure that their dead parents, grandparents and all those who came before have wealth in the afterlife, they prayed and dropped wads of fake cash into the flames.

It is a touching ceremony that speaks to a strong Buddhist tradition here and a Chinese heritage that a friend estimates at 70 percent of the population, though I have no confidence in that number and am certain it varies from the cities to the farms.

To me, the difference is striking END_OF_DOCUMENT_TOKEN_TO_BE_REPLACED