You easily can guess where I snapped this photo of a man enjoying his chocolate croissant.

When most Cambodians eat, the implements of choice are chopsticks for transporting noodles to their mouth, of course a spoon alone for soups lacking noodles, or a fork that pushes most other food to be consumed onto a spoon.

Never is a knife used at the home table or in Cambodian restaurants; spoons do the same work instead.

However, when Cambodians order croissants, doughnuts, a slice of banana loaf or pizza in Western-style eateries, END_OF_DOCUMENT_TOKEN_TO_BE_REPLACED 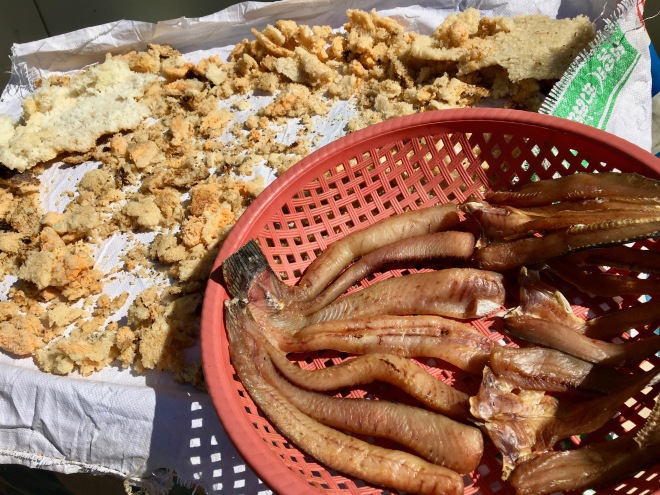 There are in various countries sun-dried raisins, sun-dried tomatoes and plenty of food that some of us don’t think of as having been dried in the sun; in fact, we may not give a thought to how it got that way.  Peppercorns are one among many examples that leap to mind.

In Cambodia, they dry food in the sun as well.  What is a bit disconcerting, however, is END_OF_DOCUMENT_TOKEN_TO_BE_REPLACED 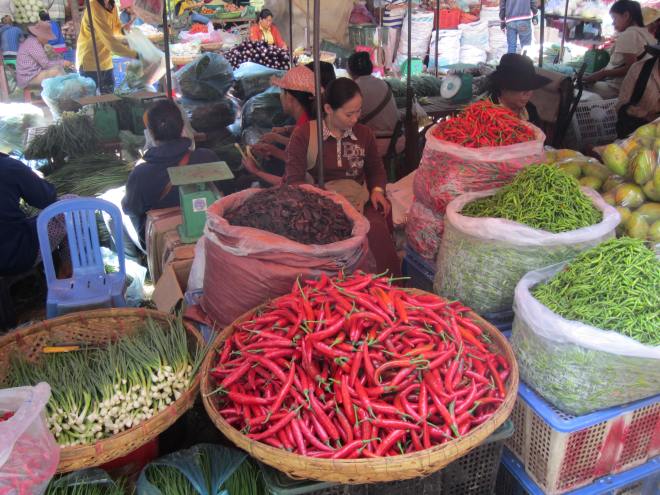 Food markets seem to fascinate most individuals who travel.  The smells, the energy, the sensual overload, each tends to make for a memorable visit, most assuredly for me.

One of my personal favorites is in Barcelona, where bustling restaurant counters along with food stalls that have displays bordering on artistic provide an unforgettable diversion.  The patterns created with fresh seafood can be especially winning, reminiscent on a much larger scale of Citarella on Broadway most effectively in years past.

But retail markets cannot hold a ladle to wholesale markets.  The one here in Phnom Penh is END_OF_DOCUMENT_TOKEN_TO_BE_REPLACED

An engrossing excerpt from restaurant critic Frank Bruni’s forthcoming book, Born Round: The Secret History of a Full-Time Eater, caught my eye in the New York Times Sunday Magazine.

Fascinated, I read the account of his youthful indulgence, which so closely paralleled mine – thankfully, only up to a point.  But here are some tidbits that resonated:

One my earliest memories is of visiting with my parents the “bagel factory” in, I think, Mattapan or Dorchester close to Boston.  My keenly recalled odor of bagels being boiled and baked is hardly as refined as Proust’s taste of madeleines, but the sense memory is just as compelling as he described.

So was I intrigued with the plight of H&H Bagels on the Upper West Side , which the Times reported as having been closed for a few hours by the taxman on Friday.

A line of customers stood outside the store, seeming patient yet confused, until the doors reopened at about 1 p.m. Readers of the Zagat’s guides have called H&H “heaven with a

hole in the center” and a “benchmark” for “fat” and “perfectly crafted rings” with “just the right consistency” to be “addictive” — citations noted on plaques placed proudly on the store’s walls.

The entities that own the main store, at 2239 Broadway, and the related bagel-making plant, at 639 West 46th Street, owed a total of more than $100,000 in unpaid taxes, and numerous efforts to make them pay had been unsuccessful, said Tom Bergin, a spokesman for the department.

As someone who fancies himself a bagel maven, let me say END_OF_DOCUMENT_TOKEN_TO_BE_REPLACED