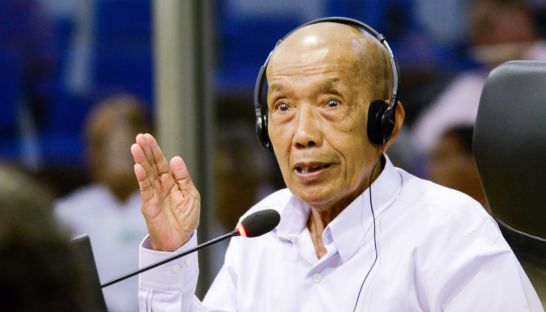 Convicted of crimes against humanity, Kaing Guek Eav, also known as Duch, testifies at the Extraordinary Chambers in the Courts of Cambodia in June. Source: ECCC/Phnom Penh Post.

The idea was not so much to report on testimony given at what is officially named the Extraordinary Chambers of the Courts in Cambodia, or ECCC, a U.N. funded organization that otherwise is known as the Khmer Rouge Tribunal.  It was a sense of obligation.

The courts’ multi-million-dollar mission since its creation in 2006 has been to prosecute ultimately just a few of the individuals involved in the genocide of more than 1.7 million Cambodians in the 1970s.  That the government is filled with former adherents of the Khmer Rouge has resulted in years of negotiations, stalling and the resulting freedom from trial of thousands and thousands of killers.

Prime Minister Hun Sen, who has held onto his position for 31 years, acknowledges that he once was a relatively senior member of the Khmer Rouge before he changed sides.

Having already borne witness to the atrocities committed by Cambodians against Cambodians at a high school that became the notorious S-21 prison — referred to as Toul Sleng — and the killing fields, I decided it was high time that I observe the trial taking place 16 kilometers (10 miles) from downtown Phnom Penh.  My goal was less to recount testimony but more to share with readers how it felt to get and be there.

It was an unexpectedly chilling experience because END_OF_DOCUMENT_TOKEN_TO_BE_REPLACED