Longtime home of Gershwin family goes on the market

In some circles, Riverside Drive has never quite measured up to the desirability of Fifth Avenue or Central Park West, even though it was designed by Frederick Law Olmstead.

But residences on the tree-lined serpentine roadway, which runs from 72nd to 181st streets along Riverside Park and the river beyond, are much in demand. 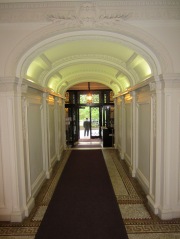 Lobbies, like this frosted beauty at 180 Riverside Drive, were designed to impress.

With many of them selling at a premium, the apartments in stately pre-war apartment buildings and converted mansions, for the most part, have boasted among their occupants notables such as Damon Runyon, George Gershwin, Sergei Rachmaninoff, Hannah Arendt, Saul Bellow, J. Robert Oppenheimer and Paul Krugman, according to Wikipedia.  My former sister-in-law and brother-in-law live there, and my first home in Manhattan was there as well, at No. 425.

When I checked one day last year to see how many apartments were available on Riverside Drive, I found END_OF_DOCUMENT_TOKEN_TO_BE_REPLACED