View of a Hamilton Heights from top floor of a nicely renovated 4,400-sf townhouse that is offered for $2.695 million.

For buyers accustomed to neighborhoods farther south, Hamilton Heights may represent challenges with respect to convenience, amenities and street life.

Yet on a recent tour of an even dozen open houses, I was struck anew with how vibrant the area is and how great is the value of properties in contrast to more popular parts of Manhattan.

As the New York Times has noted, the massive Columbia University development now rising to the south suggests that Hamilton Heights is on the verge of a boomlet:

. . . Hamilton Heights, largely unknown to those who have never cracked the 100s on the No. 1 train, is preparing for an influx of teachers, students and support workers. It is also anticipating the higher real estate prices that usually come with proximity to an Ivy League institution.

The Heights stretches from the Hudson River to Edgecombe Avenue, from West 133rd Street to West 155th, the newspaper observes.

Named for Alexander Hamilton, whose clapboard-sided country house, Hamilton Grange, was recently moved a short distance to a prominent berth in St. Nicholas Park, the neighborhood also claims City College and its more than 15,000 students, most of them commuters, as a notable component. 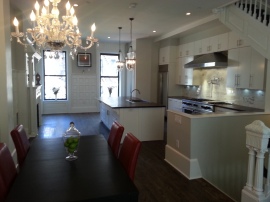 Interior of townhouse on street shown above and still seeking a buyer.

Besides Riverside Park, other recreational highlights are Riverside State Park and, as mentioned above, St. Nicholas Park, the former offering an attractive grab-bag of opportunities from swimming to basketball atop a  barely noticeable sanitation plant.

The neighborhood is served by four subway stops and, of course, a number of buses.  There are a Fairway several blocks to the southwest plus a wide variety of lesser supermarkets and bodegas along Broadway.

The residences I saw on my rambles from W. 135th to W. 148th streets between St. Nicholas Avenue on Sugar Hill and Riverside Drive ranged in asking price from $249,000 for a co-op to $3.5 million (also for rent for $14,000 a month) for a townhouse.  Farther south, each of the nine apartments and three single-family houses easily could be double in price.

Below is a sample of those that I visited, some more aggressively priced than others: